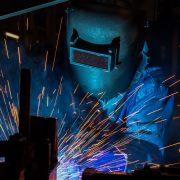 London’s renowned Victoria & Albert Museum (V&A) was founded way back in 1852 and it’s premises in South Kensington boasts a staggering collection of more than 2.3 million artefacts. The V&A has embarked on what is being described as one of the world’s most important cultural projects with the construction of two new sites in Stratford, east London.

Due to open in 2024, what will be known as the V&A Storehouse will aim to give visitors an immersive experience by taking them behind the scenes and offering access to more of the museum’s vast collections. V&A East will open the following year with aim of celebrating making and creativity from around the world. The V&A’s new buildings will form part of a new £1.1bn development scheme which focusses upon culture, innovation, education and growth and is being constructed as part of the Queen Elizabeth Olympic Park.

V&A East will be founded on piled foundations with a steel frame which is an essential element of the intricate design of the building. Steel is proving to be the ideal building material for this project as one of the requirements of the brief is the need for flexible internal spaces, with long open spans which are strong enough to bear the weight of exhibits which may be hung from above.

However, it’s the building’s façade which is certain to ensure that it stands out from other buildings in the area. With a design inspired by a 1950s evening dress, the ‘pleated’ façade will consist of seven steel nodes which will provide support the exterior’s glazed and precast cladding.

Steel will also be a feature of the building’s interior which will have five floors, two steel mezzanine floors and a plant deck on the sixth level. Because the cores will be slightly offset, there will be just one row of internal columns inside the building, allowing for clear floor spans of up to 16 metres. In addition, the majority of the internal steel work will remain exposed, with decorative paint finishes applied to provide intumescent fire protection.

This is certainly an impressive project and it’s interesting to see how the benefits of steel construction are being used to maximum effect, helping to create large internal spaces and an eye-catching external structure.

Is the steel the ultimate sustainable construction material?
Scroll to top